Welcome to Greece’s most famous cosmopolitan island, a whitewashed paradise in the heart of the Cyclades. According to mythology, Mykonos was formed from the petrified bodies of giants killed by Hercules. And did you know that the island took its name from the grandson of Apollo, “Mykonos”?

Set out on a journey to discover a fascinating world where glamour meets simplicity. On Mykonos celebrities, college students and families mingle together to celebrate the Greek summer. Whether you are an entertainment junkie out for a real good time, or a visitor who wishes to explore the island’s history and tradition, Mykonos will certainly meet your expectations.

In contrast to other Cycladic capitals, the capital town (Hóra) of the island is not built in the shape of an amphitheatre but instead spreads out over a wide area. It is one of the best examples of Cycladic architecture and a spellbinding attraction for visitors. Stroll around its narrow marble streets and admire whitewashed houses with colourful doors and window frames, bougainvillea trees in purple bloom and hidden churches. Pay a visit to the church of Panayia Paraportiani, the Town hall and the castle situated above the harbour. Don’t forget to visit the Archaeological, Folklore and Maritime Museums to take in a little history. Wander around the pedestrian shopping streets of the Hóra, always colourful and busy. The most glamorous of all is Matoyánni Street, lined with brand name stores, charming cafés and stylish restaurants.

Mykonos is an island in the Cyclades group in the Aegean Sea. It’s popularly known for its summer party atmosphere. Beaches such as Paradise and Super Paradise have bars that blare thumping music. Massive dance clubs attract world-renowned DJs and typically stay open well past dawn. Iconic landmarks include a row of 16th-century windmills, which sit on a hill above Mykonos town. 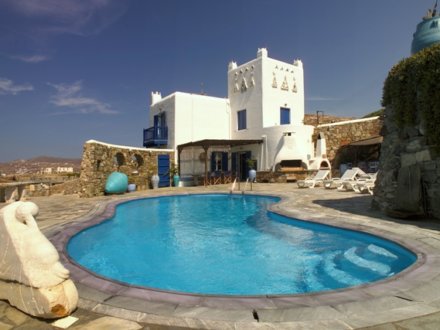