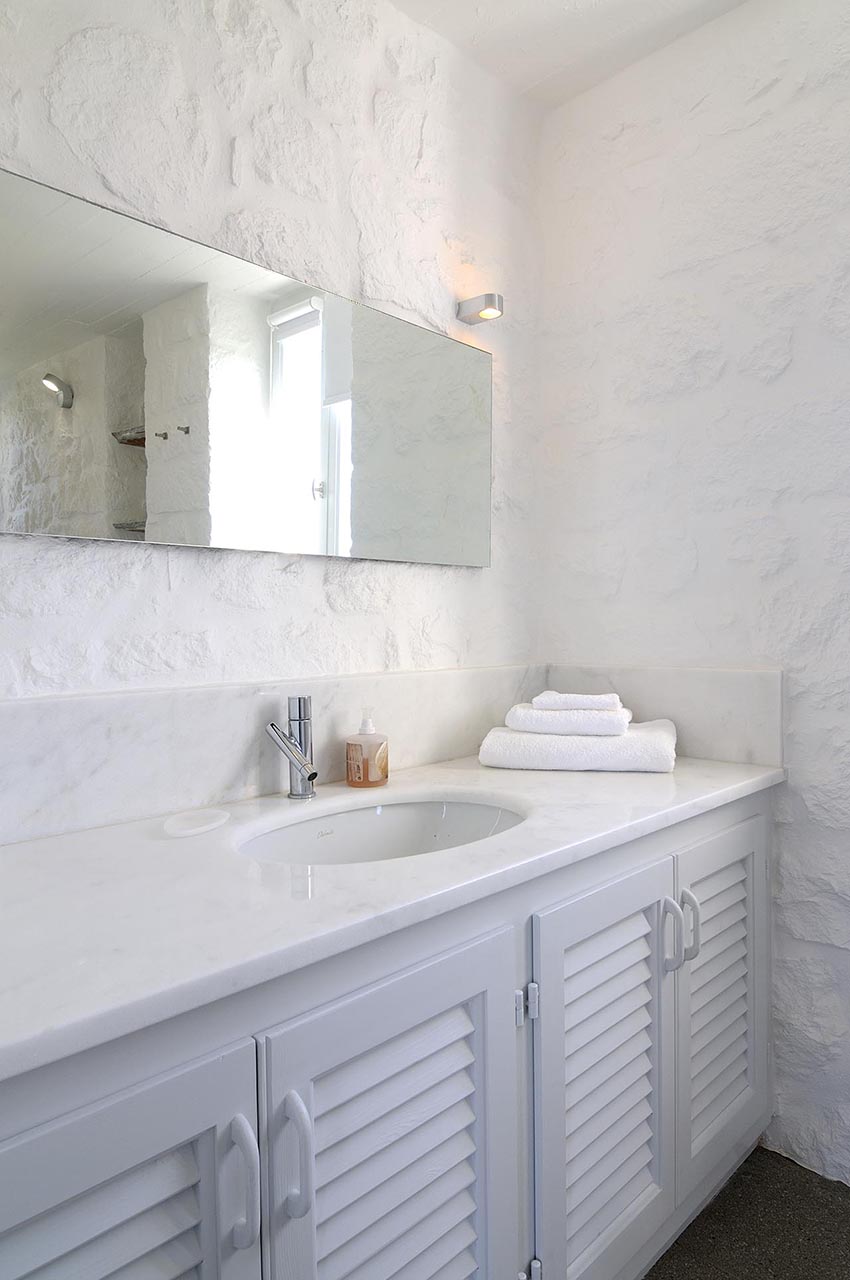 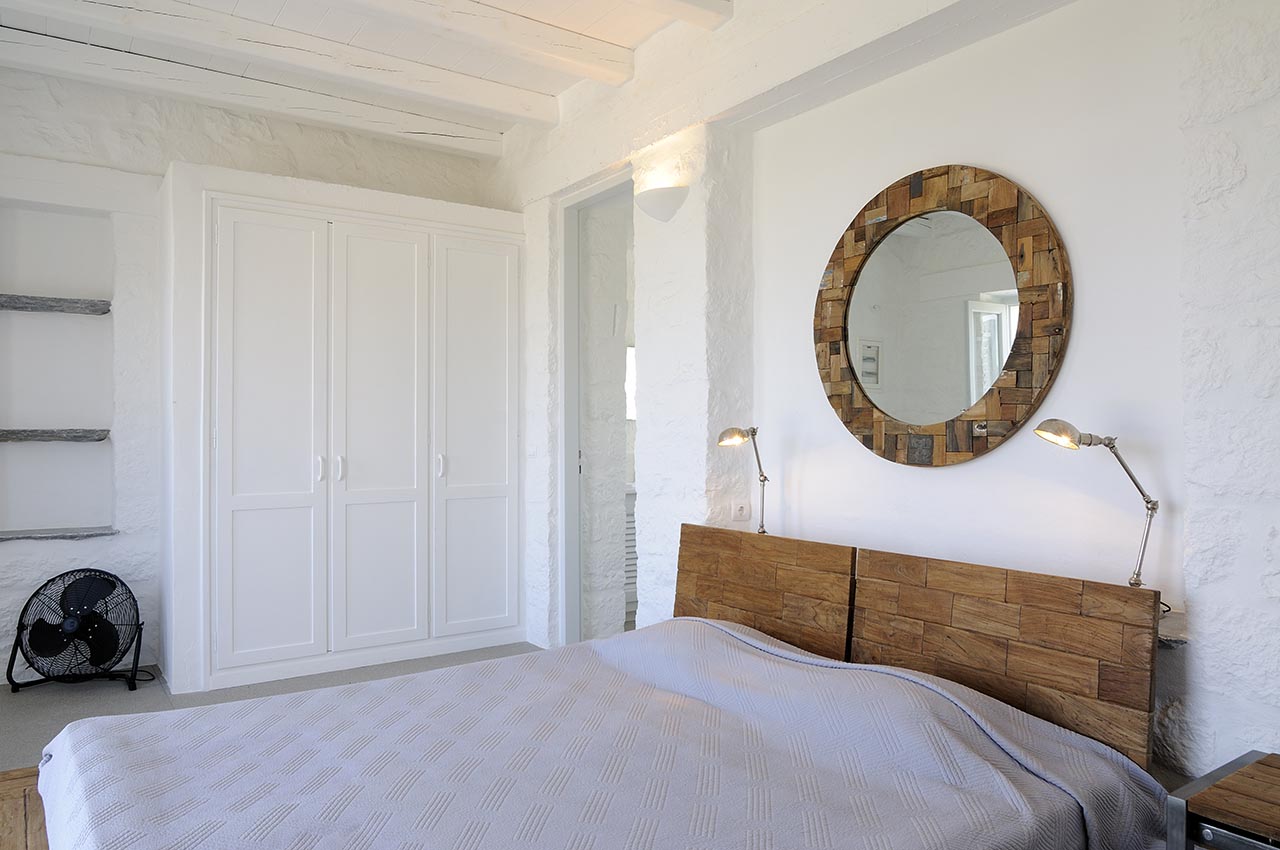 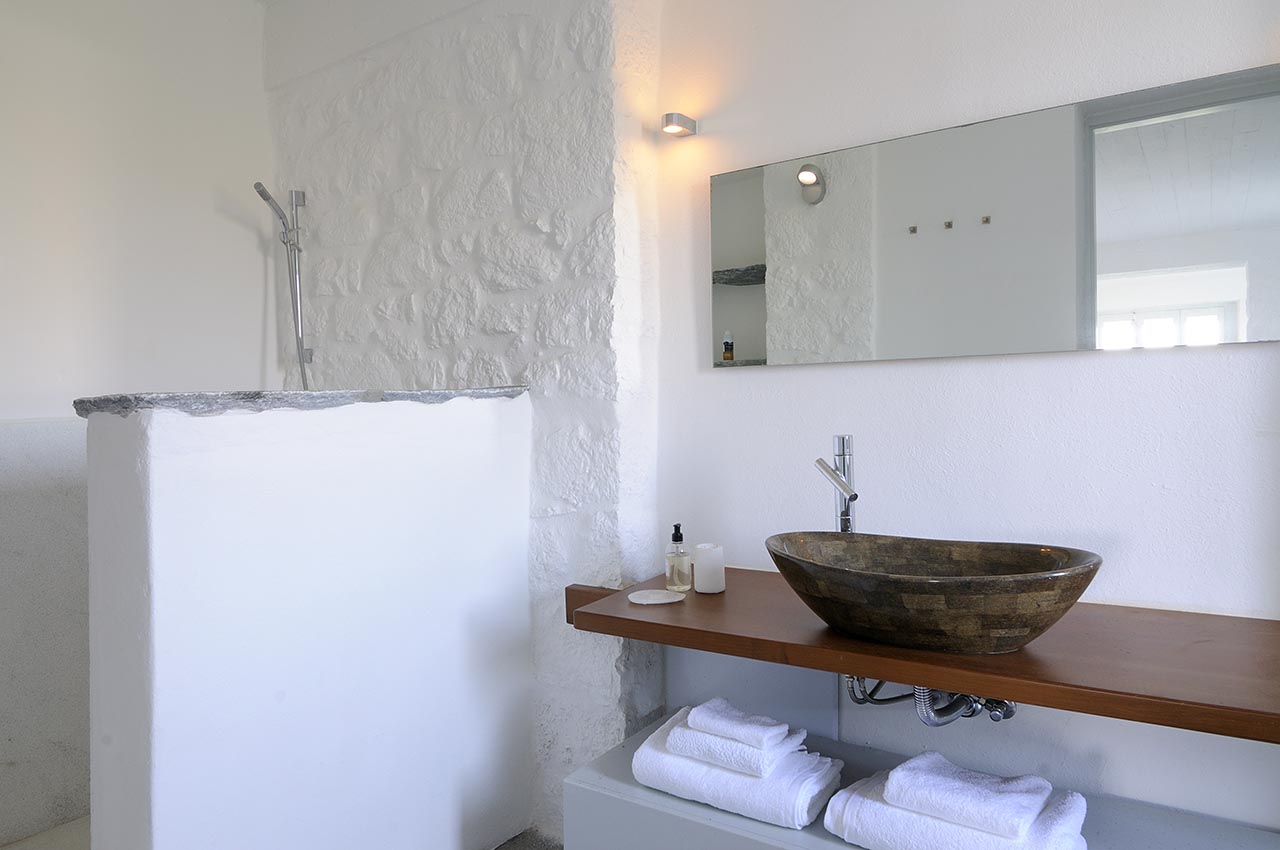 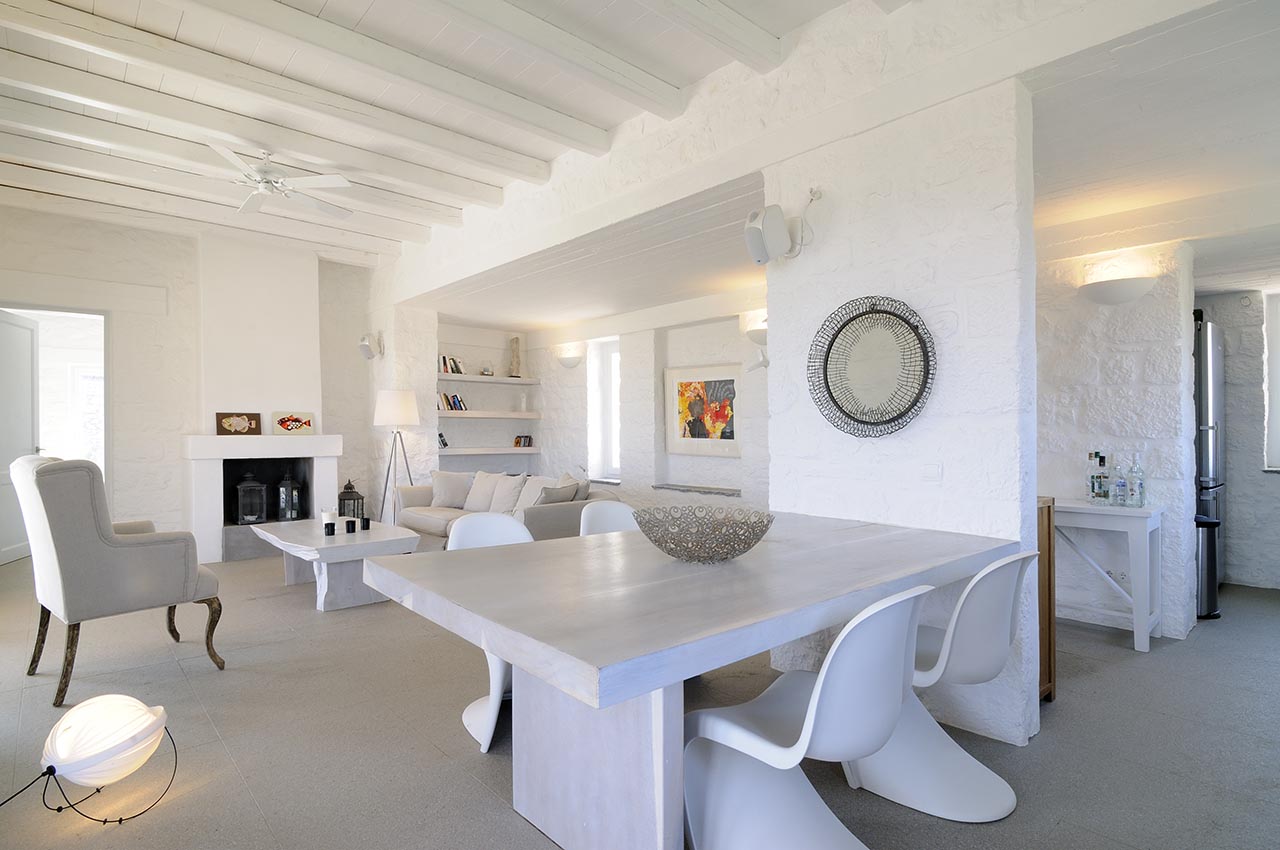 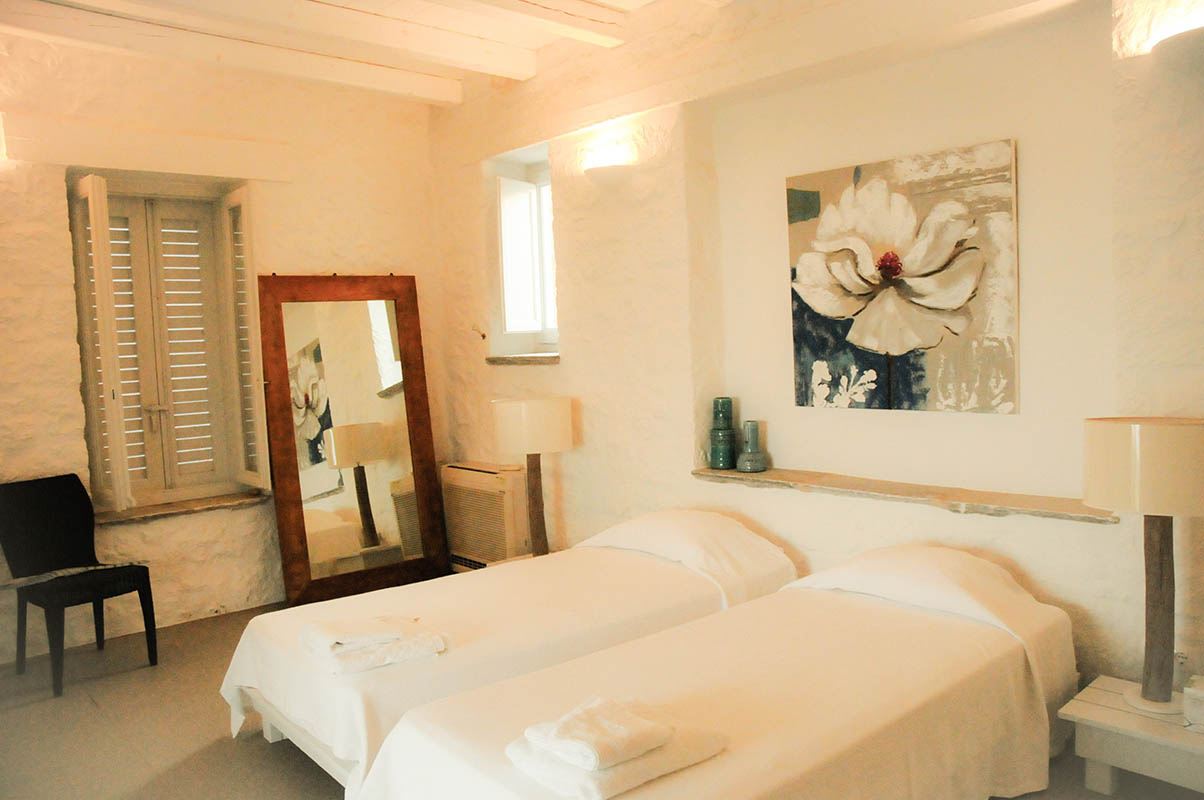 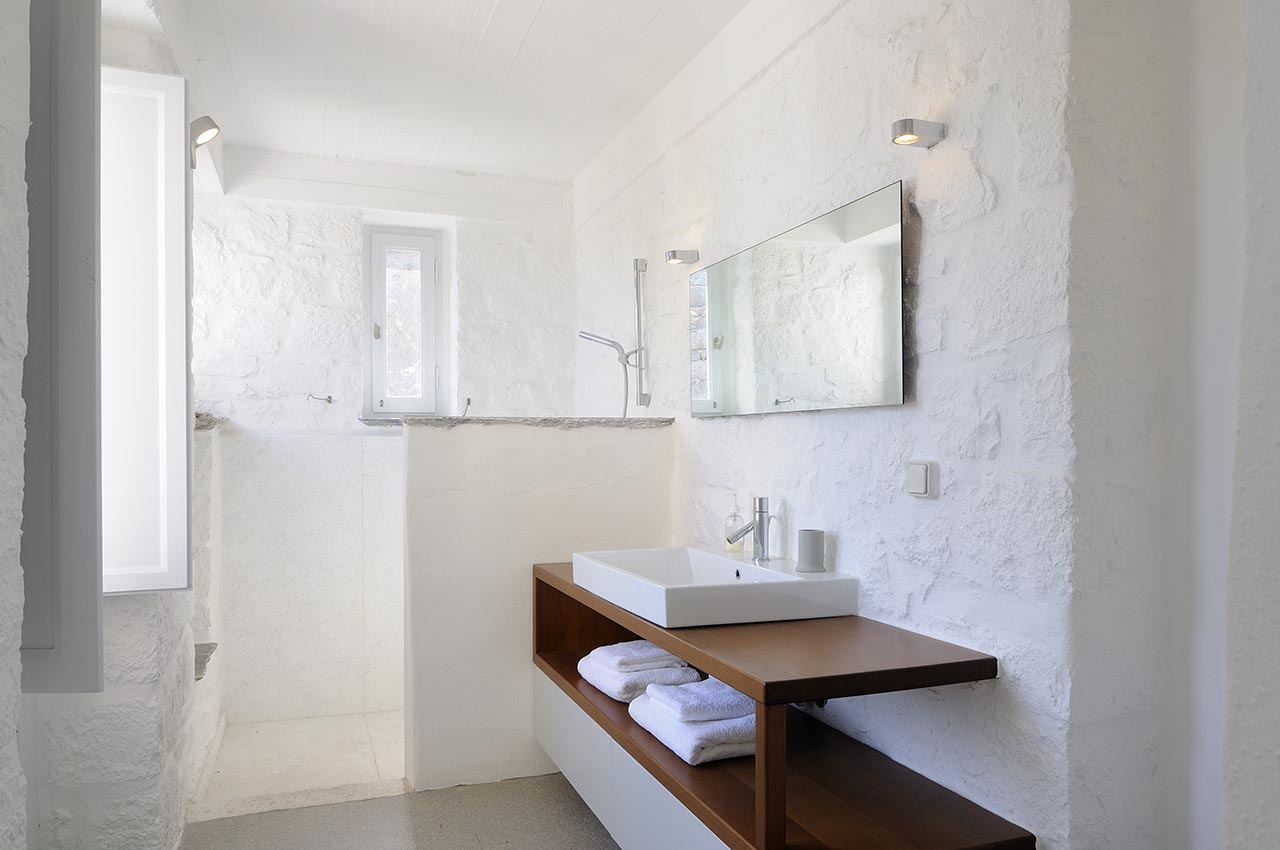 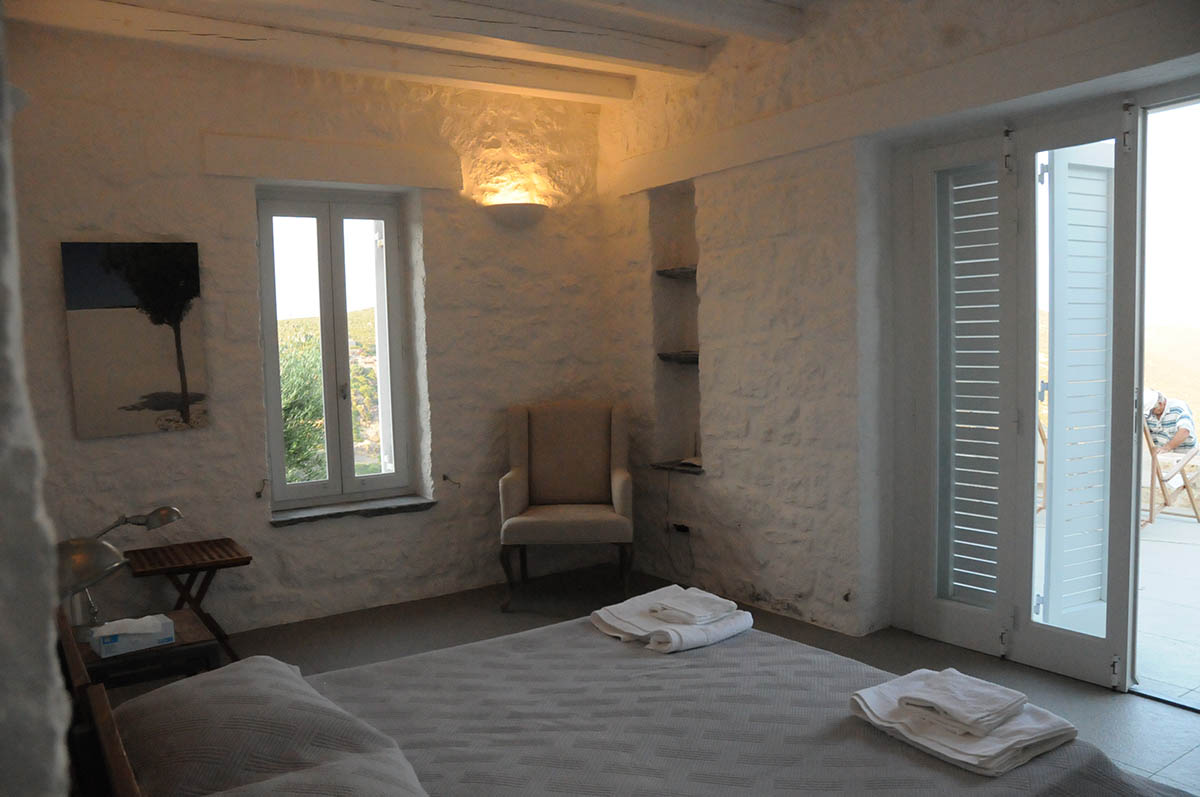 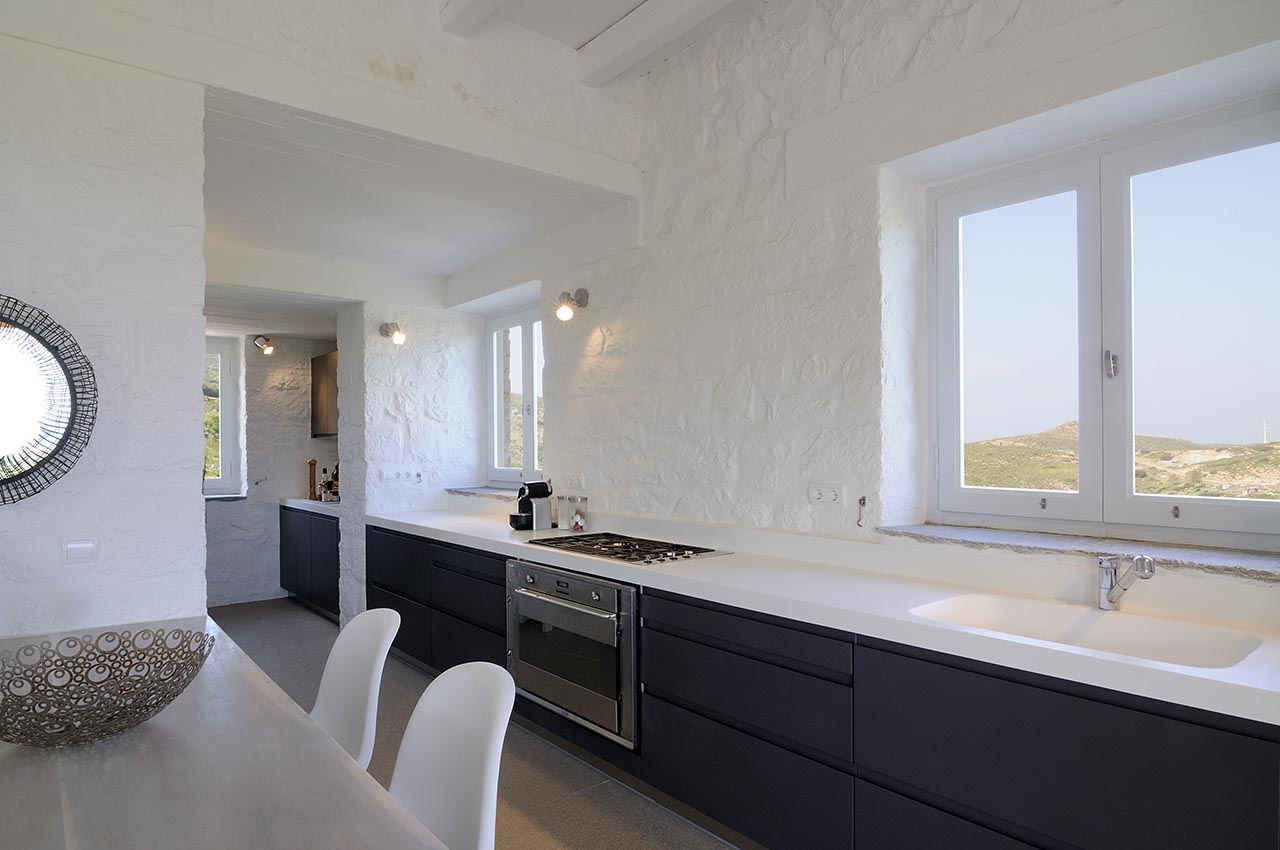 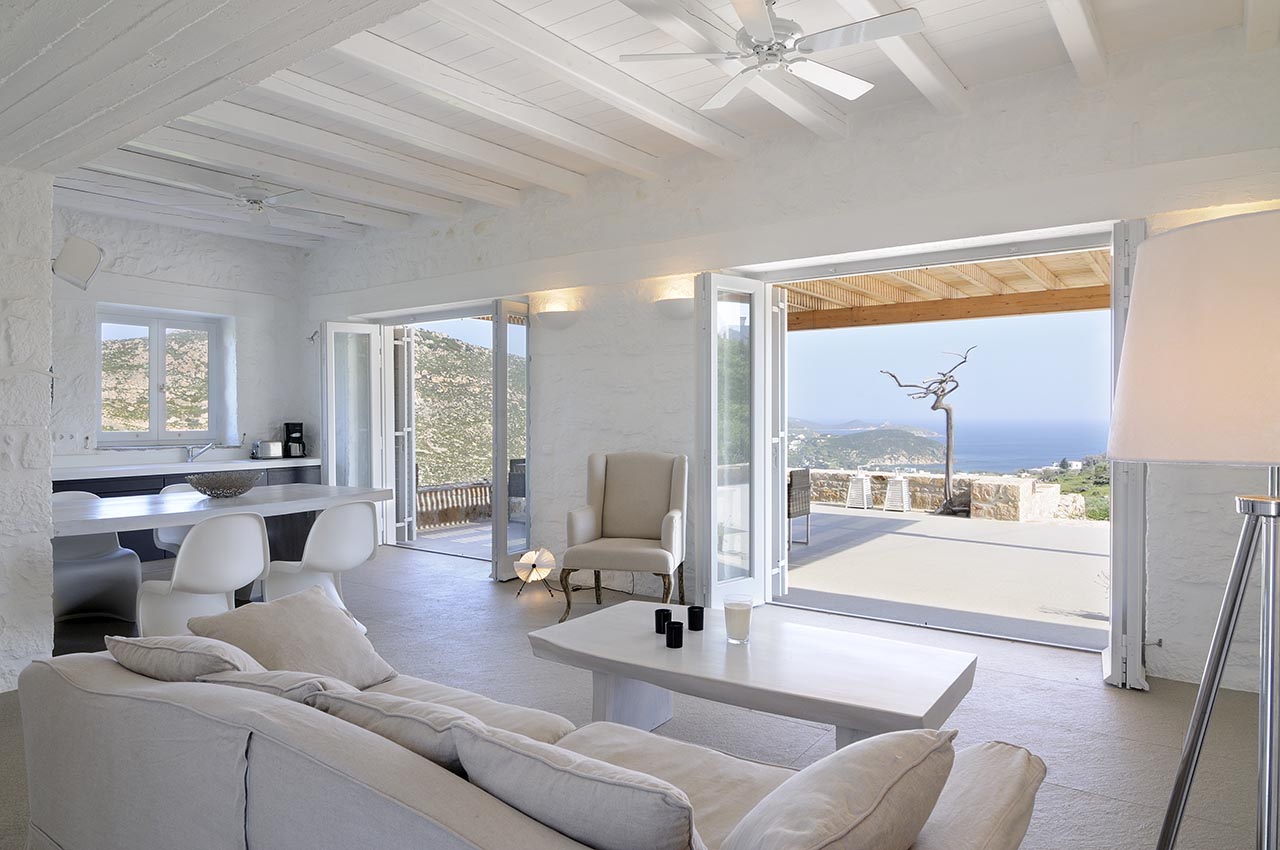 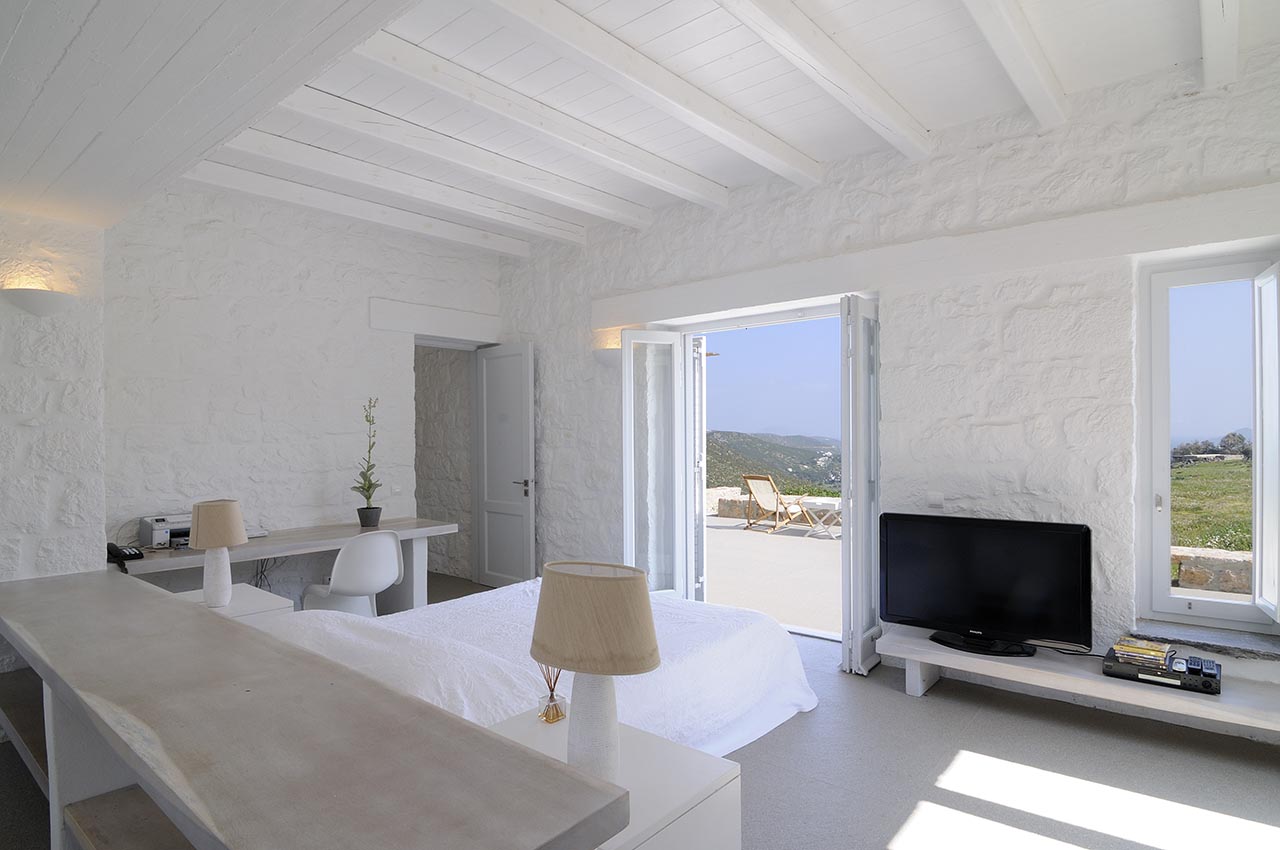 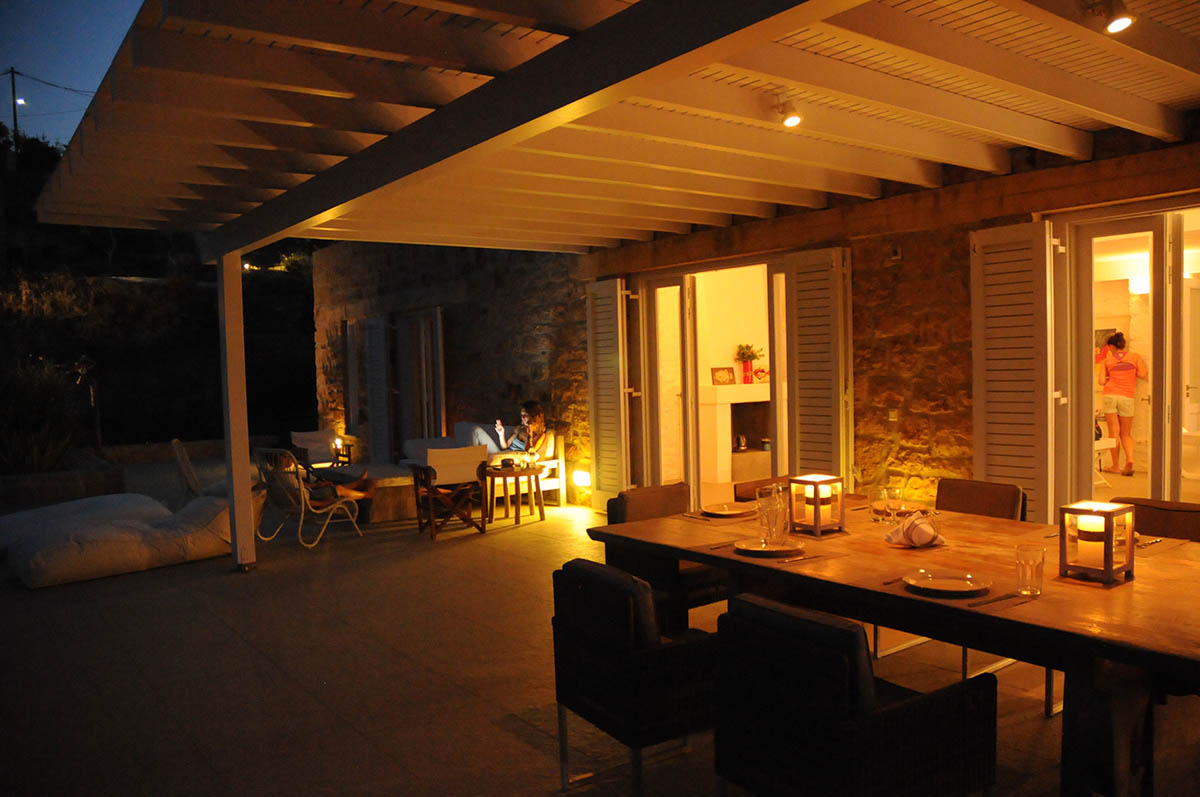 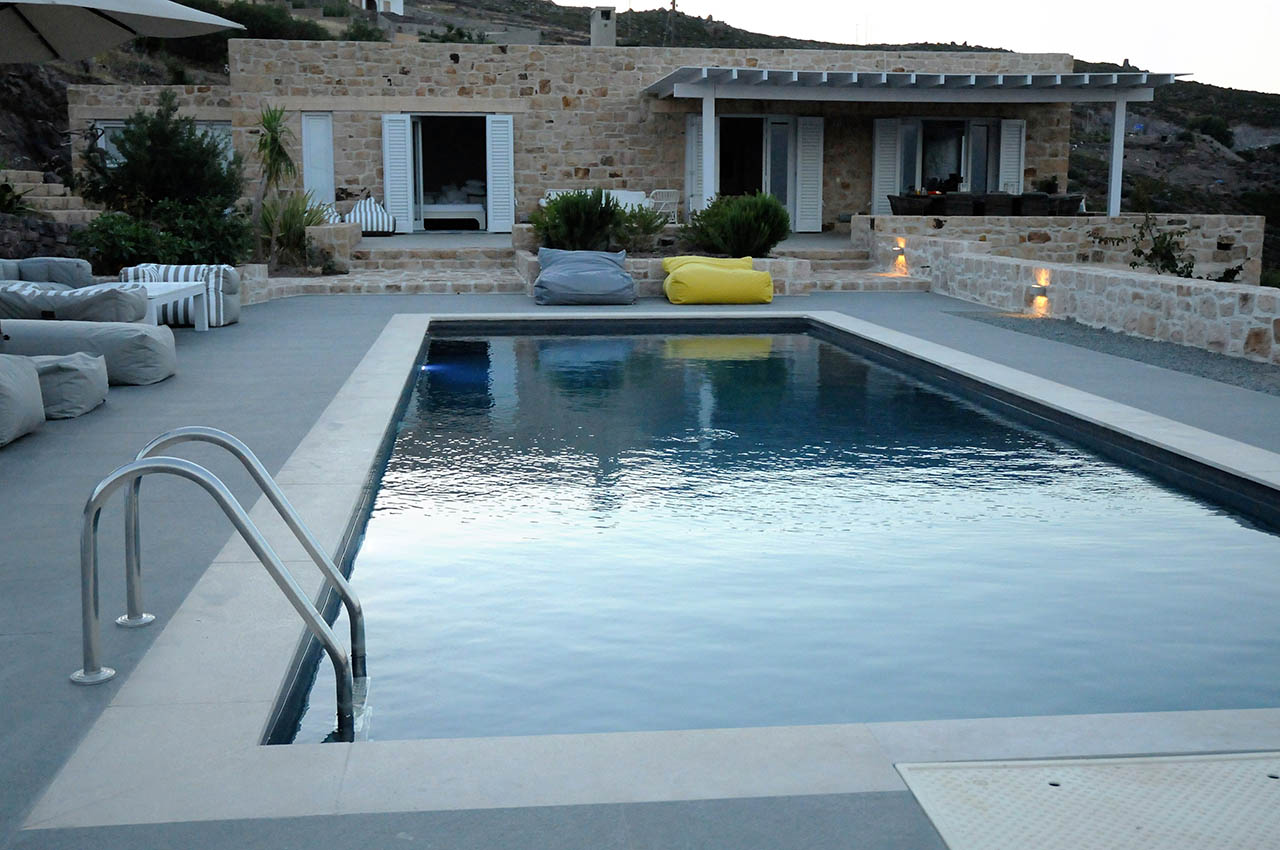 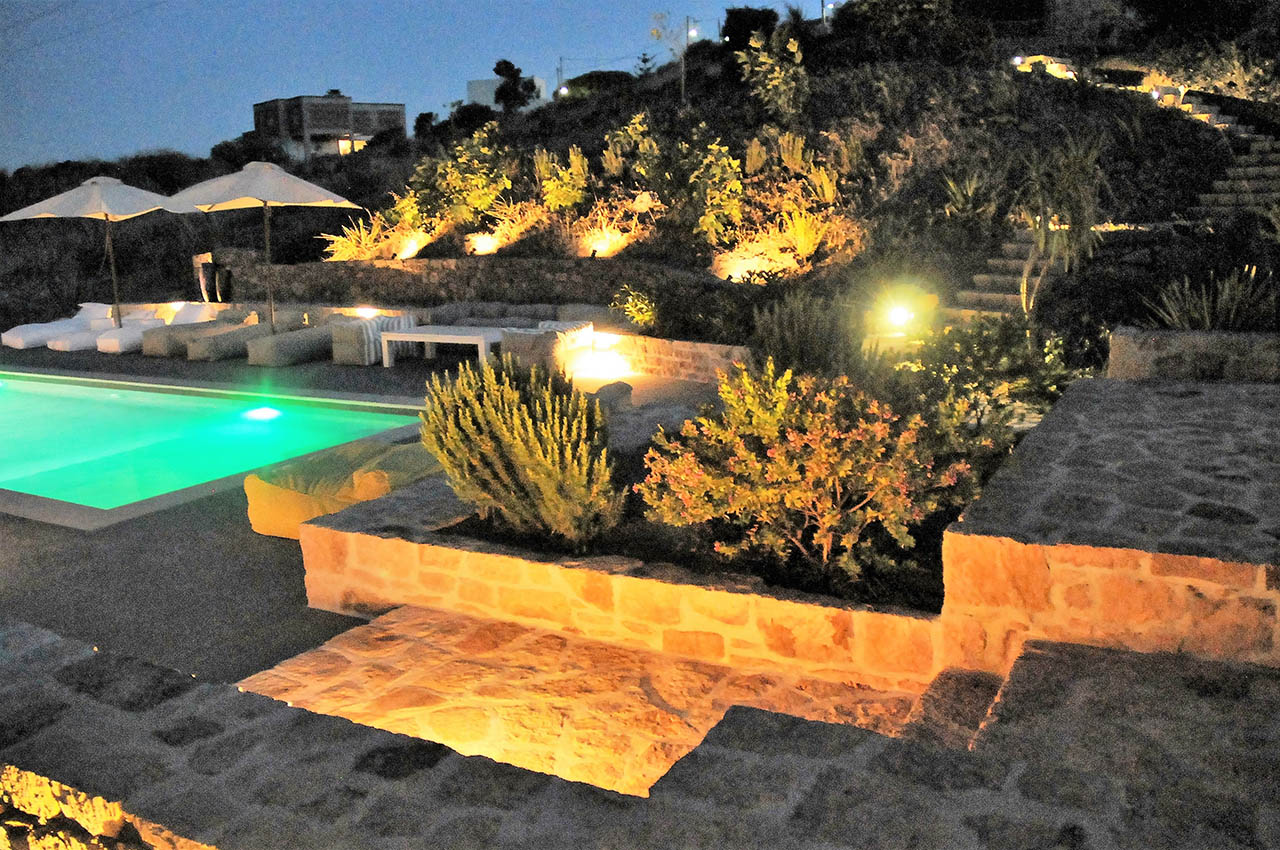 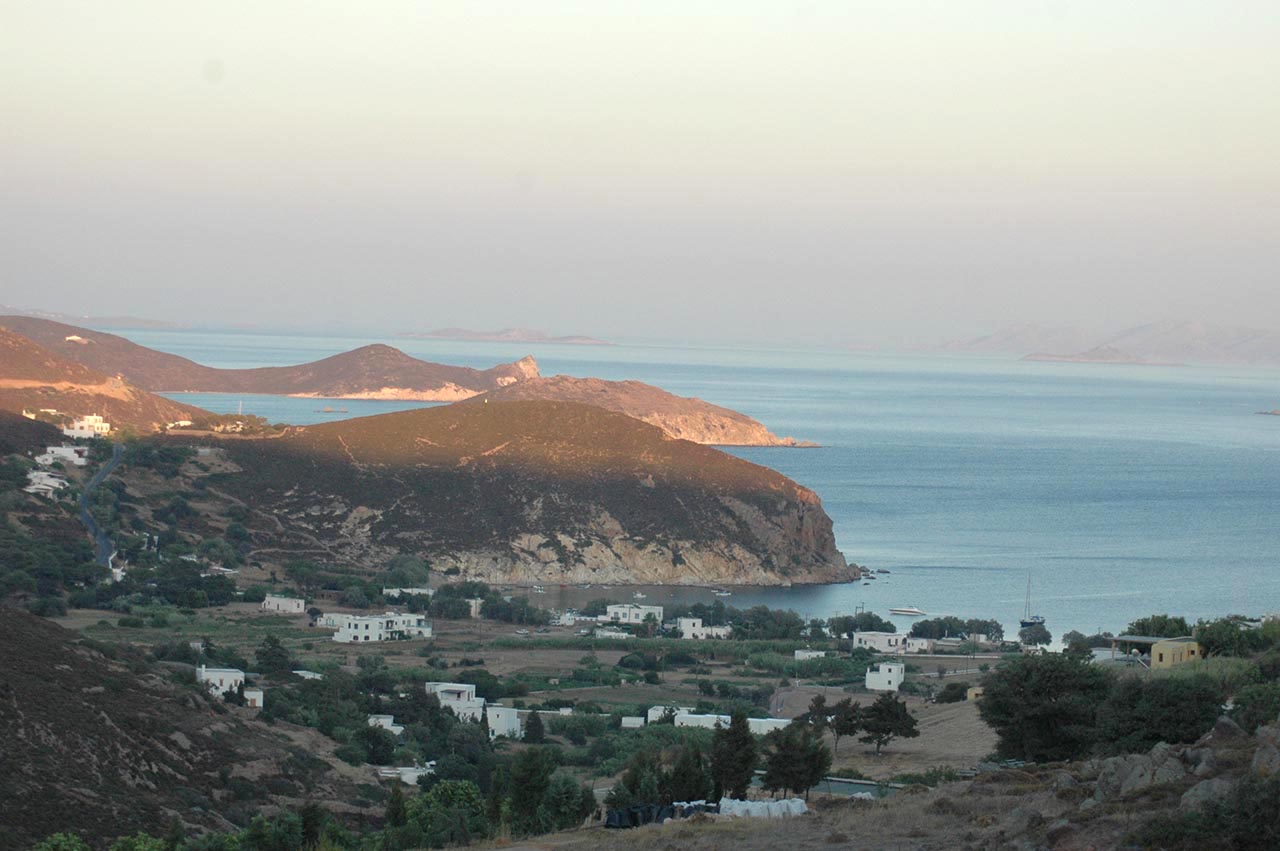 If you are looking to enjoy a unique holiday experience, the island of Patmos in Greece is an excellent choice. As many visitors observe, Patmos has this special aura which is felt the moment you set foot on the island!

We built this holiday house to enjoy it with our friends and family. Our vision was to have a relaxing luxurious home with spaces resembling a small boutique hotel. We believe that we have succeeded in our goal and we have decided to rent the property only when we can not be in Patmos.

The house is located just 500 meters of the small village of Kampos.There you can find a small taverna (restaurant), a bar, a nice church were many local weddings take place, and a playground. The closest beach is Kampos (walking distance) which is considered one of the best, it is well organized with a snack bar (wi-fi), a restaurant and water sports. Also, there are many beaches within a 10 min. drive and restaurants.

The main town is named Skala, it is the port of the island, and there are 3 ATM machines, a post office, two banks, a supermarket, a grocery store,a fishmonger e.t.c.
Should you be interested, the island has a heliport.

The house is situated on a secluded landscape with a fascinating view of the beach and a of the mountain. Also, it is well protected from the northern winds due to the landscape.

The island is famous for the monastery of Apocalypse, built around the cave where John the evangelist envisioned the book of Apocalypse. The monastery of Patmos was built in 1.088 AD, and its museum and library are among the best of its kind in Greece.

Villa Anthea Patmos pristine white walls and romantic stonework marry effortlessly. Its spacious rooms are devoted solely to your pleasure. Dive into the tender embrace of your pool or cast an adoring look over the Aegean Sea from the verandas. This delightful villa will be at the heart of blissful days under the Greek sun.

The property is situated adjacent to the quiet village of Kampos and is just one kilometer away from the most popular beach of the island also named Kampos. The villa is new and the construction finished in the summer of 2009. It is built on a private land of 9000 square meters. It is tranquil and yet not isolated. The view to the sea, Kampos beach, is sensational and the orientation of the house is ideal as far as the wind is concerned. The northern winds of August hit the back side of the house, leaving the verandas that have a magnificent sea view quite protected.

Layout
The estate is comprised of two separate buildings. The idea for this was to give our guests their own personal space and privacy.
Main building
The main apartment is a two-level building with its own separate entrances on each level. On the upper floor you find the main sitting area and a fully equipped kitchen (Arc Linea) and a very spacious master bedroom and en-suite bathroom. (sleeps 2 people) On the lower level (but not underground) there is a studio apartment with two single beds, a baby crib if requested,  a sitting area with a sofa bed and an en-suit bathroom. (sleeps 2-3 people)
Guesthouse
The second building is situated 15 meters away and is composed of two identical guestrooms with their own bathroom. (sleeps 4 people). These rooms do not have a connecting door between them. The first room has a double bed and the second two single beds.

Both buildings have a beautiful and spacious verandas in front of them with a breathtaking view of Kampos beach. In the spring time the surrounding area is very green, however in the summer due to the lack of rain the area changes to a golden hue.

The house is built with visible hand crafted local stone by the famous architect Dimitris Konstantinidis and can be described modern and yet very cosy. The wooden furniture are tailor-made from Asian teak wood. All bedrooms are fully air-conditioned. There are two plasma TVs with DVD players, a hi-fi stereo and wi-fi connection. The kitchen is fully equipped with a microwave oven, a dishwasher, an espresso and filter coffee machine. We can provide a baby crib and baby chair upon request.